The days at the Fat Cat Traveller’s Community pass in a pleasant blur of lazing around in the sunshine, learning to play guitar, drinking cider and chatting to all the interesting people we meet. In the evenings when the air gets a bit cooler, everyone heads inside to the ‘sunroom’ to sit around the log burner and drink and smoke. If there’s one thing that brings people together at this free spirited place, it’s alcohol. Every day a new handful of happy campers walk up the front path and (for some strange reason I can’t imagine) are initially weirded out by the hippy vibe and don’t talk to anyon

e. But by nightfall, and after a few glasses of cheap goon, they’ll be gassing away by the firepit or braiding someone’s hair, or hula-hooping in the garden to their heart’s content. The closest liquor store is a good 45 minute walk away and as Merit’s car is still stuck at the garage we have to go on foot and each day a group o
f us make the pilgrimage, a little hippy army, in search of alcohol. One evening, as usual, I had drunk a generous amount of goon and had a pleasant buzz going on. In my slightly inebriated state I decided to have a wander around in the dark, probably to find wild flowers to braid into my hair or something. In any case I was feeling very free and hippy-ish and this was how I came to discover the fire bath and the cute American guy sitting in it.
‘Hi’ I slurred.
‘Hi’ he replied. ‘I’m Joe.’
‘What are you doing?’
‘Taking a bath….’
‘Are you naked right now?’
‘Er. Yes.’
Pause
‘Can I join you?’ (note: intoxicated)
‘Er. Sure.’
I stripped down to my undies (not quite drunk enough to get butt naked thankfully) and slipped into the bath opposite Joe who smiled sheepishly at me. There was a wooden plank at the bottom of the bath which you had to sit on so you didn’t burn your bum on the actual tub, which was perched right on top of a crackling fire. There were candles placed all around the bath so the whole set up looked like a strange open-air spa. It was a surreal feeling, to be in a hot bath, looking up at a vast, starry sky (you can see 75% more of the Milky Way on this side of the planet apparently) with a complete stranger. A very cute, complete stranger.
As we sat there, staring stupidly at each other, a voice interrupted us:
‘Oh woah, fire bath! Sweet!’
Canadian Josh had appeared next to us and was, alarmingly, taking off his clothes.
Before I could process what was happening he had slipped in behind me and I was now wedged between both of them, which meant I was closer to Joe which wasn’t unpleasant, but also that my behind was pressed against Josh’s front, which was. Poor Joe was looking a bit bemused. After all, he had just been trying to take a relaxing bath alone. The only positive thing I could draw from Josh’s presence was that at least he might be a bit less grubby post-bath.

It’s been a week at Fat Cat. My toenail polish is chipped and my feet are filthy, I haven’t worm make-up in over a week and Yo and I have slotted nicely into this rag-tag group of bare-footed world wanderers. So much so that were are totally unprepared to return to reality and the bustling metropolis (sort of…) that is Auckland.

ride takes us out of the sticks and into the city. We dodge the wild eyed woman screaming ‘Fuckery!’ at passersby outside the station and the singing Amish couple outside Dunkin Donuts and make it to the hostel. The BASE chain hostels are the mecca for clueless first time travelers, big, impersonal and full of the usual suspects (see list below.)
Just a few of the typical types of backpacker….
1. The annoying couple: usually American, this loved up couple spend all their time squashed into the bottom bunk watching movies on their iMacs, necking, and ignoring everyone else in the room.
2. The creepy old guy: There’s always one; over 50, travelling alone, and sharing a mixed dorm with a load of 19 year olds. Do not engage in conversation. And hide your underwear.
3. The Brit Dicks: these guys arrive in large groups looking like they got lost on their way to Magaluf. Here to drink, party and shag their way through as many nationalities as possible, they can be found staggering out of the hostel bar shirtless at 3am or sculling the entire crate of beer that the receptionist is trying to confiscate at check in.
4. The ‘how do they do it?’ girls: These girls somehow manage to endure a 28 hour plane journey and still emerge looking immaculate. They seem to wake up every morning with perfect hair, manicured nails and flawless make up. They are a subject of mystery (and bitchy looks from the dirty-nailed, un-coiffed rest of us.)
5. The serious backpacker: These guys are the real deal. Usually German and dressed in various shades of beige they can be found hiking up the nearest mountain or cooking organic quinoa in the hostel kitchen.
6. The desperate virgins: Freshly ironed shirt? Check ($2 iron hire in the laundry room) Over generous spritz of Lynx? Check. Can be heard saying things like, ‘Got to look presentable for the ladies lads’. Usually back in bed by 12. Alone.
7. Over-excited 18 year old Germans: Self explanatory, they’re literally everywhere, Ja Ja Ja Schmetterling
8. The ridiculously attractive Swedish girls: tall, blonde, blue eyed supermodels. Would be easy to hate if they weren’t all so nice…
9. The Irish invasion: will have found the nearest Irish pub within 30 seconds of arriving and will refuse to go anywhere else for a night out.

After a few days at BASE we’re already bored with the city and we miss our eco-friendly home. So we decide to head straight back to Fat Cat for a few more days before embarking on our tour of NZ in our newly acquired car we bought from Merit.
But now, this is where things start to go wrong. We have become so relaxed in our happy, hippy bubble that we forget that we are only a few miles out of the biggest city in the country. We are in fact in Henderson, West Auckland which, noone has thought to inform us, is a pretty dodgy suburb. We have packed everything in the car (4 backpacks, Yo’s, mine and two others; French Karine and little German Marcel who plan to travel with us) and are all set to go when Yoan decides he needs to drive to the mall to get some last minute stuff. He heads off with Angelique and Marcel. Half an hour later they’re still not back. An hour passes, still no sign of them. I have a weird feeling that something is wrong, I tell Karine. My fears are confirmed when Yoan finally appears, pale faced.

‘What’s wrong?’ I ask instantly.
‘Our backpacks’ he says. ‘They’re gone.’ He gestures behind him and I now see the car. The back window has been completely smashed. A small group of people have gathered around the car. I try to process what Yoan is saying.
‘We were parked in the multi-storey, we were only in the mall for 10 minutes, 15 at most…’
‘Oh shit’ is all I can say.
‘I’m so sorry’ Yo keeps repeating.
Karine is beside me, speechless.
‘All our stuff’ I say. ‘Oh shit, oh shit.’
Merrit has spotted her old car. ‘Oh fuck’ she screeches. ‘No way!’
Everything I have (thankfully bar my phone, passport and money) was in my shiny, brand new backpack. And like an idiot I realised I hadn’t even thought to write my name or any details about myself inside. I was wearing a black top, an old pair of jeans and flip flops. That was all I had left. We were all stuck with nothing. Poor Marcel has even lost his passport. We call the police and speak to a bored sounding woman who says the likelihood of finding our bags is minuscule. Car robberies are rife in Henderson and, of course, our backpacks were in the back seat and in plain view so we can’t claim anything off the insurance.
Rafa and Gabi kindly let us stay in the campground with a borrowed tent while we get the car repaired and figure out what to do. Everyone is as shocked as we are and offer us clothes and sympathy. That night we all get very drunk (which makes us feel better) and the next day we scour the nearest thrift shops for bargains. I had expected the worst; pit-stained t-shirts and ra-ra skirts circa 1999, but I was actually surprised by a lot of the stuff I found. (The best finds were a $7 hold-all that replaced my backpack for the rest of the trip and a $2 cardigan that is now one of my wardrobe staples.) It’s a shit situation but I reason with myself that it was only clothes really and besides, didn’t I have too many already? So, instant spring clean, and an excuse to come home with a new wardrobe. Plus, as everyone always says, it’s better to travel light, right? That’s the main thing I learned from losing everything; when you’re left with practically nothing you realize how little you really need.
So, a week later than planned, and minus Marcel who has to stick around in Auckland and wait for a new passport, we finally hit the road with a very empty car. On the way out we spot a mural somebody has painted on the wall that suddenly seems very fitting…One Time a Man Lost Everything, And He Became Free 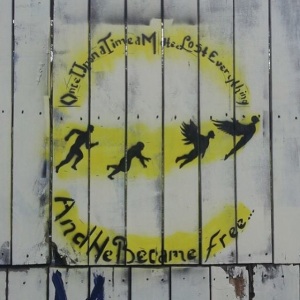 One thought on “The (pretty disastrous) start to my New Zealand Adventure Part 2: Fire baths, A brief trip to Auckland and the time we lost absolutely everything…”