Oh Melbourne… I really wanted to hate you. I wanted to return ‘home’ with the smug satisfaction of knowing that this chilly city pales in comparison with the big smoke that is Sydney. But after only a few days here I can already see why Melbournites are so fiercely proud of their city. The CBD is a shopper’s Mecca (even humble H&M is spread over three floors of what looks like an enormous mansion) and the famous laneways are scattered everywhere filled with hip coffee joints and quirky, tucked-away boutiques waiting to be discovered. The battered old ‘restaurant cars’ trundle through the city, adding a touch of olden day nostalgia to the modern surrounds.

The main differences between Melbourne and Sydney are easy to spot. The weather for instance. Melbourne. Was. Freezing. Like coat, scarf and gloves, stay inside under the covers freezing. My thin knit jumper just didn’t cut it in this chill and I shivered my way through the weekend, leaving my skimpy birthday outfit in my backpack and heading to Fitzroy in jeans, boots and a baggy jumper. Practicality over style; gone are the Uni days of tottering around on icy pavements in tiny skirts and heels (just to avoid the £2 cloakroom fee). I really am 26…Compared to Melbourne, Sydney stays pretty warm all year round making its proximity to dozens of beautiful beaches a major plus. When the weather is bad in Sydney, it is BAD. As in closed schools, cancelled trains, catastrophically bad. Raging storms can batter the city for days on end, when it rains it rains hard, like someone is tipping an endless bucket of water out of the sky and once it even hailed the size of pebbles… But the storm always passes, to be followed by days on end of blue skies and sunshine.

Fashion wise, Melbourne has much more of a laid back vibe going on, which makes a refreshing change from Sydney’s try hard, uber-chic flash pack. Watching girls teeter along the uneven pavements of the Cross in super thin, sky high stilettos is painful to watch. Maybe because it’s just so damn cold people here would rather forgo fashion in favour of wrapping up boots and woolly hats. Saying that though, there’s no denying that Melbourne has it’s own distinct style, a rough edginess, all structured coats and pointy boots, channelling cold weather cool.

It’s impossible not to compare the two cities and after nearly 8 months Sydneyside and only a couple of days in Melly there’s no way I could say which is ‘better’. But I appreciate the differences. Like how Sydney is undeniably an absolutely beautiful city; the harbour with its enormous bridge and iconic Opera House, the bright and breezy beaches, tacky but fun Darling Harbour, everything has the wow factor and it screams at you, ‘Look at me! Look how amazing and wonderful I am!’ Whereas Melbourne is the complete opposite of Sydney’s in your face-ness. When I first arrived, late afternoon on a dreary, grey day I was instantly underwhelmed by this city that everyone raved about. Then I went exploring and realised, the wow factor is here too, but you have to go looking for it. And you might find it down any one of the countless, colourful laneways snaking through the city where hidden treasures and oddities abound. Here, graffiti isn’t considered an anti-social act of vandalism, instead it is glamorised, heralded as an art form and a huge part of what makes Melbourne’s quirky subculture so unique. This street art is everywhere, pavement to wall to wheely bin, some of it awe-inspiring and thought-provoking.
And, most refreshing of all, the people here are actually friendly! Yoan snaps a pic of me by some cool street art, ‘Nice shot!’ says a passing stranger with a smile. We are handed free soup by a smiley Italian guy in Federation Square. ‘This would never happen in Sydney’ I mumble to Yo, which smiley soup guy overhears. ‘Hey’ he says, holding out his arms palm up in a kind of shrug, ‘welcome to Melbourne!’ 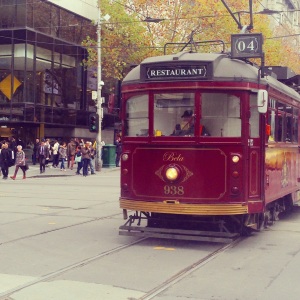 3 thoughts on “The time I cheated on Sydney with Melbourne…”